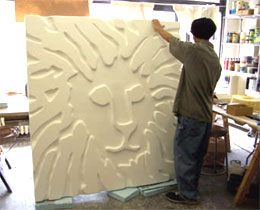 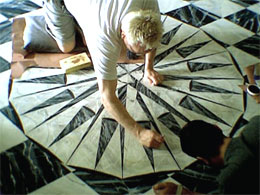 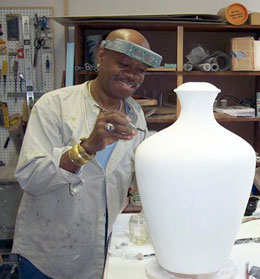 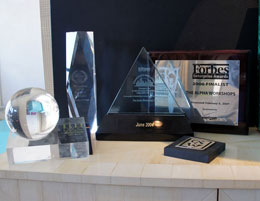 As a response to the growing number of New Yorkers living with HIV/AIDS, founding Executive Director Kenneth Wampler and a dedicated Board of Directors established The Alpha Workshops in 1995. Modeled on the early twentieth century English Omega Workshops and the American Arts and Crafts movement among others, The Alpha Workshops was the nation’s first non-profit decorative arts studio to train and employ people with HIV/AIDS or other disabilities/vulnerabilities in the decorative arts.

A former actor and decorative finishes artisan, Wampler spent the 1980s and early 1990s working with the AIDS Resource Center – now Bailey House –  building supportive housing for homeless people living with HIV/AIDS. He eventually conceptualized The Alpha Workshops as an innovative approach to unifying the disparate spheres of decorative arts, supportive employment, and HIV/AIDS under one progressive mission.

The Alpha Workshops evolved into a fully-licensed vocational training school and elite decorative arts studio. Year after year, Alpha continues to expand its constituencies, funding base, and design client list, as well as increase the breadth and professionalism of its decorative arts training programs. As the organization embraces new opportunities and challenges, Alpha maintains a deep and lasting commitment to the HIV+ and LGBTQIA+ communities, as well as the community of individuals with disabilities or other vulnerabilities in New York City and beyond.

1998 POLLACK introduced a line of fabrics adapted from Alpha designs. Sales over the next decade generated more than $100,000 in revenue. In 2008, POLLACK launched a second collection of Alpha designs. Over 25 years, Alpha’s licensed collections grew to include partnerships with a number of elite industry manufacturers.

2001 The Alpha Workshops introduced Painted Papers, a line of hand-painted wallpapers. The Texture Collection, a second line, followed in 2008.

“Best Practices: Vocationalizing the Homefront”, a publication of the Corporation for Supportive Housing that highlights innovative training programs, featured The Alpha Workshops. Alpha also participated in the National AIDS Housing Conference – presenting its successful model of training and employment for people living with HIV/AIDS

As part of the restoration of Gracie Mansion, the official residence of the Mayor of New York City, Alpha recreated a historically accurate faux marble floor in the house’s grand entryway.

2004 Alpha is awarded a 2004 Community Hall of Fame Award from Thirteen/WNET for contributions to the community.

Alpha was a finalist for the Forbes Enterprise Award.

2010 The IFDA (International Furnishings and Design Association) presented Alpha with its Circle of Excellence Award for special humanitarian efforts.

2018 The Alpha Workshops embarked on an exciting partnership with The Jewish Board of Children’s and Family Services. Through its new structure as a wholly-owned subsidiary of The Jewish Board,  The Alpha Workshops received enhanced administrative and financial services while retaining its autonomous brand identity and unique decorative arts training. The combined programmatic capabilities of two such distinctive and complementary organizations enabled both teams to provide additional support and enhanced community resources to staff, students, and clients alike.

2019 Founder Kenneth Wampler retired from his 24-year tenure as Executive Director to pursue other interests. Longtime Finishes Studio Manager Edward Farrell officially assumed the role of Executive Director in May; his elevation elicited accolades and applause from longtime Alpha supporters and the design community at large.

Under Ed’s stewardship, The Alpha Workshops won a 2019 Interior Design Best of Year award in the Wallcoverings category for its Capsule Collection, an inventive re-imagining of six classic wallpaper patterns produced in partnership with Benjamin Moore.